Jenise Reece is graduating with her Bachelor of Arts this year.

Jenise Reece could only manage to write a sentence, while all her peers would have completed a paragraph during some assignments at the University of the West Indies (UWI), Mona.

She would have to ask for extra time to complete her exams, which demotivated her.

But these failures in his academic career, which began in 2017, could not prevent him from obtaining his Bachelor of Arts in Integrated Marketing Communication with a minor in Spanish this year.

The 23-year-old suffers from cerebral palsy, a disorder that affects muscle tone, movement and motor skills.

Reece was born prematurely and lacked oxygen, which led to the disease. She walks with a limp and works much slower than normal.

“Throughout high school [St Hugh’s High School for Girls], my notebooks were always empty, I relied on textbooks because I just couldn’t do dictation. I remember when my 10th grade teacher asked me how I would survive college because having a lecturer and taking notes would be very difficult for me,” Reece told the Jamaica Observer.

“I just couldn’t keep up because I’m a bit slower than everyone else and there were times when I felt down. When I had to do the last year of Spanish and I had to do transcription, and the thing is, I write very slowly, I was far behind. I remember telling my teacher that I couldn’t do that. It was very depressing to know that it was something that I couldn’t prevent,” Reece added.

But his lecturers made the process easier by encouraging him to go at his own pace. She also received support from the university’s Office of Special Student Services.

While she struggled to do well in school, getting to and from school also posed a challenge.

“I was a student who commuted, so it was very difficult for me. I had to worry about navigating on my own. I had to rely on taxis and it was such a scary time because I had to explain to them that ‘you know I have a problem with my foot’ which I found very awkward,” explained the resident of Sainte-Catherine.

But, even though Reece’s condition interfered with her daily activities, she was determined to carry on.

“Having cerebral palsy has always motivated me to play an active role in society, not just sit in the back bench and feel like I have no use. It motivates me to go out and at least try. I have met many people in my life who doubted me – teachers, members of my community who saw my disability as something bad and as something that challenged my intelligence,” she said.

The cerebral palsy warrior has a message for those experiencing the same condition:

“Keep pushing, don’t stop. Don’t let anyone bring you down. I know sometimes it can be very depressing, but keep going. We all have talents and we are all here for a reason. We all have a purpose,” Reece said. 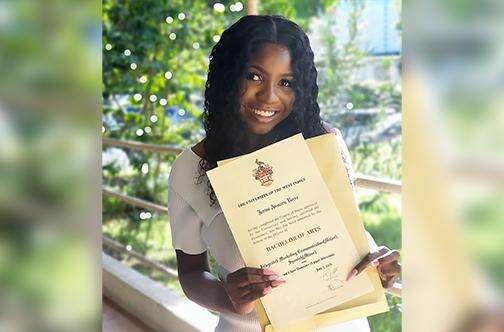 Jenise Reece is posting her Bachelor of Arts degree earned this year.