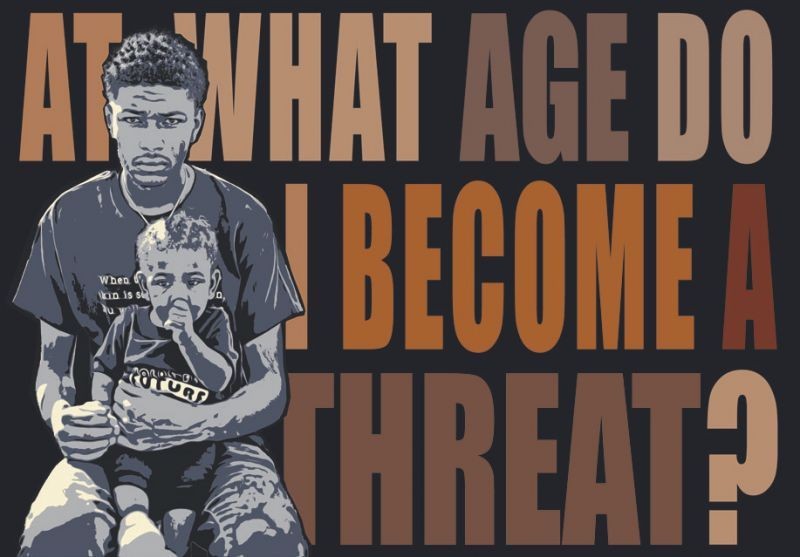 “At what age do black men and women become a threat to society? asks Alexis Thompson, a student at North Carolina Agricultural & Technical State University in Roxboro, NC, and winner of this year’s Peoples Choice Award at Embracing Our Differences, the 19th annual juried outdoor art exhibit. celebrating diversity. Thompson, who is studying graphic design, received a $1,000 scholarship for her work titled “Threat?” which depicts a young black man holding a baby in his lap. The words “At what age do I become a threat?” hover behind him. Thompson says she was originally motivated to create the piece after Breonna Taylor was killed by police while executing a 2020 no-knock warrant. She says she wants to create art that helps to give a voice to those who need it. “My goal is to make others feel included and have a legacy to leave behind. How can we make this world a better place to live in?” Sarah Wertheimer, Executive Director of Embracing Our Differences , says the People’s Choice award is determined by a survey that was made available to the 371,256 visitors who attended this year’s expo from January 15 to April 10. She adds that “Threat? received significantly more votes than all the works of art in the exhibition.

Next year’s Bayfront Park exhibition will run from January 18 to March 13, 2023. Additionally, for the first time, the exhibition will also be on display at Butler Park in North Port, from March 22 to April 19, 2023; and at State College of Florida, Manatee-Sarasota, from April 26 to May 29, 2023.